Are Proper Adjectives Even a Real Thing? 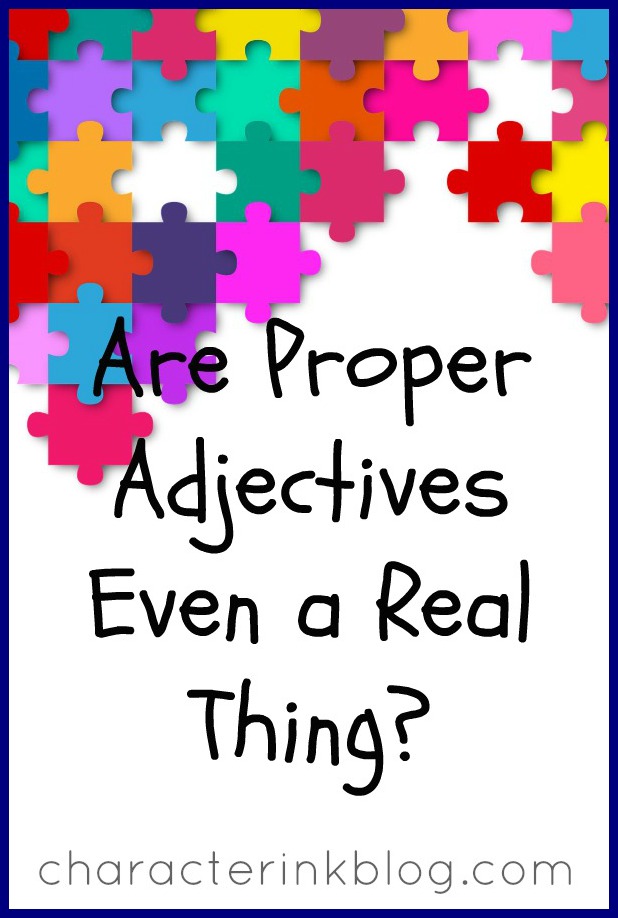 So many grammar debates, so little time. And here’s yet another one: Are proper adjectives a thing? Or are they really just proper noun elements within a common noun?

We will likely never know for sure….

However, it really doesn’t matter what you call them. They need some proper capitalization!

We have a tendency to think that the noun is the first part of speech we learn, so it’s automatically simple to locate, which isn’t true at all (it’s true we learn it first–just not true that it is simple!).
A noun can become many different parts of speech.

3) She is so schoolish when she explains things (adjective)

One cannot truly find the part of speech that a word is when the word is out of context. (Be careful of programs that teach parts of speech out of context if you are choosing grammar materials for your children! They should never be given a list of words and told to tell the part of speech of each one!)
The same thing is true of capitalization–we learn it early, yet it is far from simple.
*Cap this in this instance but not in this.
*Cap this when it is used as an address but not when it is used in a non-address scenario.
*And on and on.

Into that madness, enter the proper adjective–another capitalization nightmare, in many cases.

Essentially, a proper adjective is a proper noun used as an adjective. The key to using this properly (with the proper capitalization) is knowing for sure that the word is usually a proper noun (without having context, in many cases!).

For example, the following words are capitalized when used as adjectives:

So…. a proper adjective is essentially a proper noun that has been put into adjective form.
Words are different parts of speech based, oftentimes, on their suffixes. For example, loveliness (with the ness suffix) is a noun…but changing a suffix often changes a word’s part of speech. Thus, lovely is an adjective; loveliness is a noun.

There are many other difficulties with proper adjectives and proper noun elements within common nouns.

For example, animal, flower, plant, and tree breeds are not capitalized (i.e. husky, mockingbird, rose, poison ivy, and sycamore tree). However, if a proper adjective or proper noun element is part of the name, that part of it is capitalized (but the rest of it remains lower case):

1. black-eyed Susan (Susan is a proper noun in other contexts, so it gets capitalized here as well)

No wonder our students are confused!

It is up to us to help them with these challenging usage scenarios.
We can do this by…

1) Being patient with them. (Sometimes we have to look these things up ourselves!)

2) Giving them lots of practice with them–and verbal feedback and discussion of the practice sentences and exercises.

3) Not making everything “count.”

A word about number three above. In my books, I use a TPA approach—Teach-Practice-Apply. This means they learn the information in the teaching portion of the book. Then they practice the skills with little or no grading. This is done in passages of material usually–completely in context. Then they apply it in exercises/assignments, and, ultimately, in the Checklist Challenge and their writing–where the rubber really meets the road and where we want the application to really sink in.

Let’s make grammar, usage, spelling, writing–all the things–as easy as we can for our students!