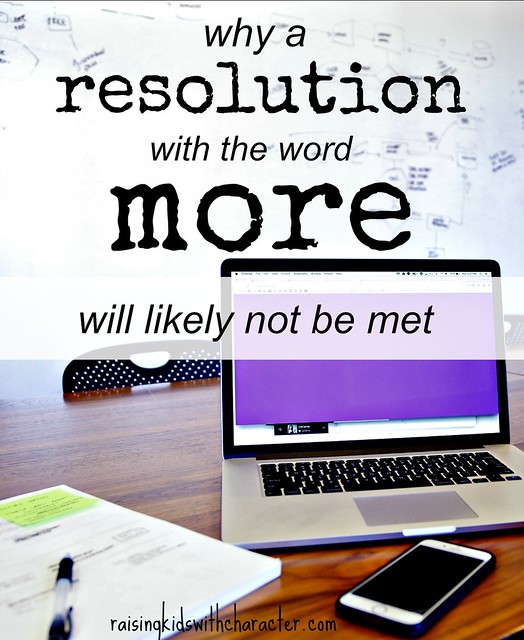 I recently looked up top resolutions for the new year—and saw some interesting lists. They were the typical ones you would expect—lose weight, exercise, get out of debt, eat more healthfully, spend time with family, etc.

But what struck me most was the recurring use of the word MORE.

What exactly does a resolution that has the word MORE in it even mean?

MORE than what? By what measuring stick? How will you know when you have achieved it?

Resolutions that contain the word MORE will likely not be realized simply because they are too general, too abstract, too non-checkable—if that were a word.

Any change—be it a New Year’s resolution or a beginning of the school year plan or a new family schedule must be quantitative in order to be met. In other words, there has to be some sort of method by which the resolver can see whether or not the resolution, plan, habit, or schedule has been met.

My husband and I are problem solvers—both of us. Sometimes we butt heads because he has an idea to solve a problem at the same time that I have another, albeit superior, idea. Smile… More often than not, though, the fact that we are both problem solvers has not been a negative but rather an amazing way to propel us to accomplish goals for our family.

In our problem solving, we have had to be extremely specific in what the steps to success were—no use of the words MORE, better, less, fewer etc.

Rather than saying that Ray would meet with our boys MORE to mentor them, we said that he would meet once a week per boy—or once a month per boy—or whatever the goal was.

The other thing we have found in our quest to be problem solvers is that we can’t solve too many problems all at the same time! In our parenting seminar, Raising Kids With Character,” we encourage parents to choose one or two things from each session that really spoke to them—one or two things that they want to implement or utilize right away in their homes. This keeps parents who have just sat through six hours of parenting lectures from being so overwhelmed that they are unable to implement any of the tips and strategies.

Throughout our thirty-one years of parenting, we have tried to tackle one problem or aspect of our family that needed changed per week (and later one per month or so). We sat down together and decided what one thing we would work on—and exactly how we would work on it (without using those taboo words of MORE, better, etc.!).

Sometimes we want lots of changes immediately! We are so quick to see the areas in our family that need work—and maybe there are many areas that we need to work on (we could always think of many!)….but if we set out to change everything all at one time, we will seldom change anything.

If you have a dozen things you would like to work on this year, consider doing one per month—and really dedicate a month to making that one thing happen…with a plan of attack that is measurable and concrete and doable. Then when that one is realized, add another the following month and so on.