When Do I Give My Child a “Mulligan”? 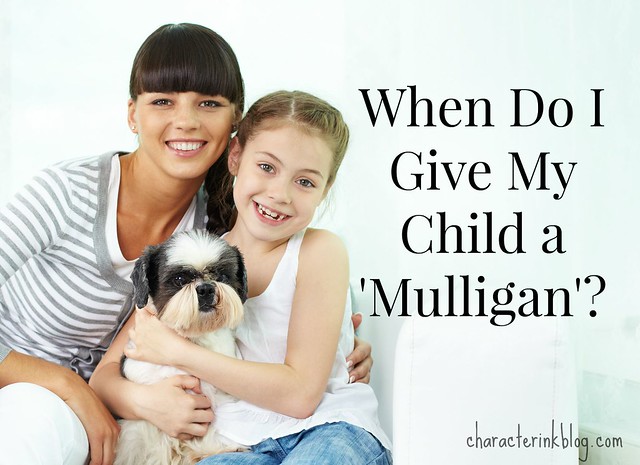 Recently when my sister, her husband, and her two young teen daughters were here visiting in Indiana from North Carolina, we took as many from our family who could come and my sister’s family to our local YMCA to play a game called “walleyball” (rhymes with volleyball). This game is similar to volleyball in its rules–with the addition of walls as it is played in a racquetball court.

Since the court is smaller than a regular court, the game is actually a little easier for those who are not as strong–but not as easy for stronger people who hit the back wall (one of the out of bounds zones) quite often. The combination of the walls, the rules, the size of the court, and the various strengths of the players that night has made me think over and over again in the days since we played about the idea of the “mulligan.”

As indicated in the opening of this post, a mulligan is “an extra stroke allowed after a poor shot”–that is NOT counted on the scorecard or against the one who has been issued the “second chance.” 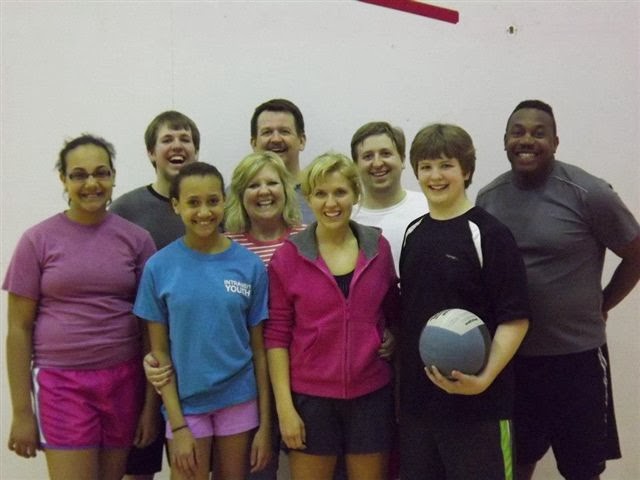 This term is one that we have thrown around our family of seven children (now ages seventeen through thirty-two) for years since my husband is a master at adapting games to fit the crowd who is playing. He loves to bring two or three families together and modify a kickball game or our oldest son’s homemade handball invention in order to allow littles to play with biggies; parents to play with children; and lesser skilled participants to play with “athletes.” Thus, a “mulligan” is a familiar word–and one that has been spoken many, many times in our home over our thirty-two years of parenting as we have enjoyed playing with our children.

It wasn’t uncommon during our walleyball night to hear someone shout “mulligan” whenever a person attempted to serve but didn’t make it over the net. Then we would evaluate and determine “yes” the person gets a mulligan or “no” he does not. What has led me to think of these mulligans quite often since that evening is the criterion on which we based giving mulligans during our play.

I mean, how does someone tell a sweet, small, twelve-year-old balletic niece that she cannot have a do-over after she tried so hard to get the ball over the net?  Or how do you turn down a poor middle-aged sister (*smile*) who is still recovering from frozen shoulder surgery: “too bad–you should have hit it harder”?

So when did we give mulligans that night–and what does this have to do with parenting?

Allow me to give you our walleyball mulligan run-down:

1. My younger niece is not a “ball” type of athlete. She is a dancer, cheerleader, and gymnast. She is also fairly tiny. She was a good sport about the whole night–but walleyball probably wouldn’t be her first choice of games. Because she is small, she had trouble getting her serves over at times, so everybody agreed to give our sweet Brittany some mulligans when her serve fell short of the net.

2. My sister had just had surgery for frozen shoulder approximately ten weeks before our Y night. She was able to play okay, but definitely didn’t have the range of motion that a serve often requires. Thus, we moved her closer to the net and gave her mulligans.

3. Our youngest daughter (24) has never been a volleyball player. She always thought she was terrible at it, and she often sat on the sidelines and watched others play through the years (in spite of her being very fit, a runner, and serious ab-workout girl!). She wouldn’t ask for a mulligan when she missed, but because she has just been learning volleyball over the past few years, we sometimes offered her a mulligan as well.

Who didn’t get a mulligan?

1. I adore volleyball. I played a little in high school, and while I’m not great at it, my years of experience in playing it at picnics, etc., meant that I was not a mulligan candidate.

2. See that athlete in the picture above–serious tennies and headband? That is our son’s wife who was the captain of her high school volleyball team and took MVP at nationals. She played a year of volleyball in college–no mulligan for that expert! 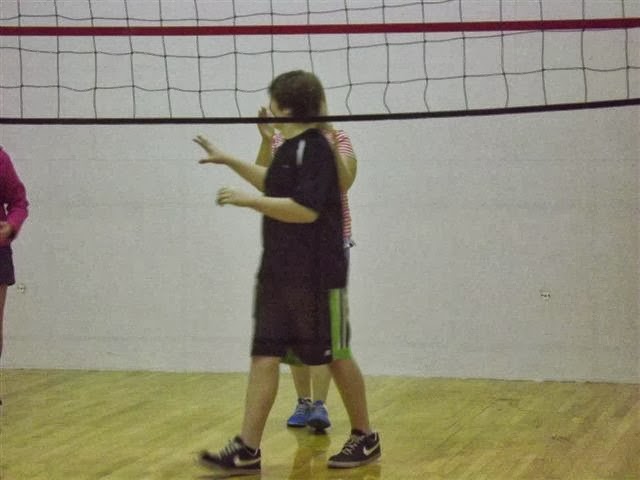 4. None of the men or teen boys got mulligans. They are strong, athletic, and competitive. No motivation or encouragement was needed!

So what does this have to do with parenting? More than you might think.

In the “game” of parenting, we have the opportunity every day to give more chances or to show “tough love”–to extend grace or to train through consequences. We face these situations often unprepared.

We lament over them–“I just feel like if I don’t bring his shoes to gym class and he gets an F for the day, he will blame me” or “I know we have told her dozens of times not to leave her phone lying around at the gym, but now that it is stolen, I feel sorry for her because she misses talking to her friends. And we homeschool, so her phone is a way she socializes,” etc. etc. etc.

And I am not making light of any of these scenarios. We, after all, have raised six “teens”–and have one teen that we are in the thick of raising (a last child, nonetheless!).

Grace. Training. Mercy. Responsibility. I mean, honestly, who wants to choose among those? 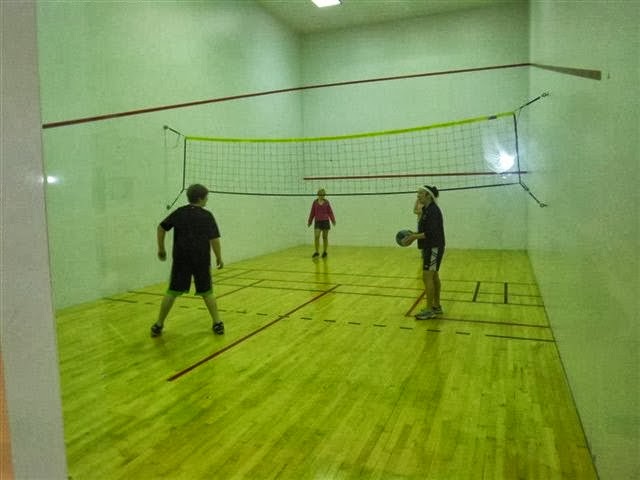 But let’s break down our walleyball game a little further to see if we can get some benchmarks for giving our kids mulligans:

1. Brittany is younger. She is not as strong as the big guys. She is not as used to ball handling like her sister who plays basketball at school. Extending mulligans to Brittany, who was trying to serve the ball over the net with all her might and had a good attitude in the process, is a good decision.

And so is giving a mulligan to a child who is struggling and genuinely wants to change/alter his behavior/make things different. And you know what? Most of the time we parents know when this child deserves a mulligan. The key is going to be to not give mulligans forever to a struggling child–but to gradually reduce the mulligans as the child becomes stronger and more adept.

2. My sister was injured for pity’s sake! She was being a sport just joining in the family fun.

When a child is downhearted or overwhelmed, he often needs grace. I don’t mean in trouble because of continual bad decisions or poor character but rather truly discouraged. When mercy is extended to a child in this situation, it can make a huge difference in how he pulls himself up by his bootstraps and gets moving in the right direction.

How long does a person with a shoulder injury need to recuperate before she should just serve already? Just as my sister’s doctor told her that it varies from person to person (with hers being more extensive once they got in there and found bone spurs as well), so it is with our children.

This is where heart parenting really comes in to play. Should the mulligans come to an end and this “injured one” come back now? Are we prolonging the healing process by not letting her live with consequences?

Someone who is hurting needs a mulligan–but not forever.

3. Volleyball playing is somewhat of a new experience for Kara. Granted, she is twenty-four, but she has only been getting on the court and playing over the past couple of years. You could say that she is in volleyball training.

A child who is “in training” in a certain area needs more mulligans than the child who has already been doing that skill or task for a while. We talk about this in our parenting seminar (Raising Kids With Character)–the idea of “childishness.” Childishness (forgetfulness, irresponsibility, etc.) in a child who is still learning his morning routine or his after school chores is best handled incrementally–with mulligans in place as needed–but not so many mulligans that the immaturity and irresponsibility remain.

We gave Kara a mulligan or two–but her volleyball training is about over (evidenced by how much better she played tonight than the previous time we played), and her walleyball mulligans are about to come to an end as well. 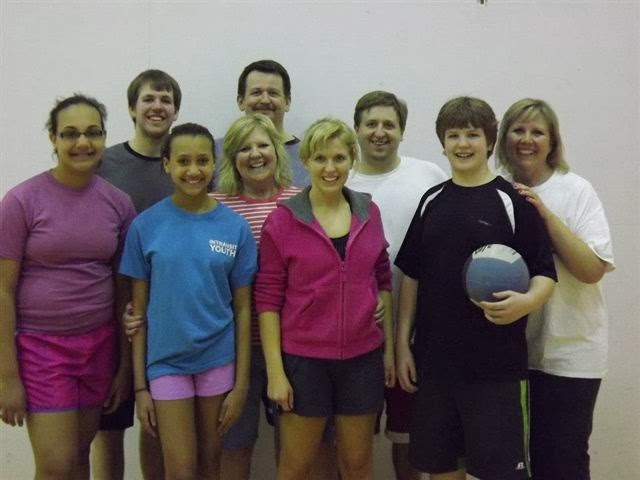 What about those who didn’t get mulligans?

1. Strong people who have done something over and over again do not need the motivation that comes with a mulligan (usually). It was easy to tell our twenty-two year old, athletic son to roll the ball under the net if he hit the ceiling on his serve. No training was taking place; no motivation or encouragement was needed.

2. Those who were hitting the ball so hard that it hit the ceiling or the back wall did not need mulligans. They needed to learn cause and effect. Walleyball is different than volleyball–the court is shorter and the back wall and ceiling are off limits. If you continue to smack the ball with that force, you will serve it out, and the other team will get the ball. 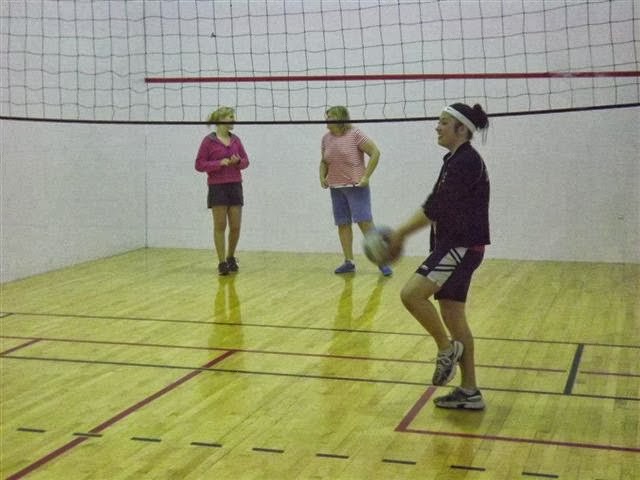 It wasn’t that hard in our walleyball game to determine who got a mulligan and who didn’t.

And while that isn’t always the case in parenting, we can use some key benchmarks for extending grace, including age of the child, past experience, whether other consequences have already been in place but didn’t help, the attitude of the child at the time, the frequency with which something occurs, the strength of the child, and more.

Because sometimes each one of us needs a mulligan in this game called life. But we also need to learn and grow. Because each of us needs a little grace sometimes. But because the Bible tells us that we can easily take advantage of that grace. Because we don’t want to exasperate our children. But we don’t want to be the kind of parent who doesn’t help our child become responsible or kind or thoughtful. Yes, sometimes we need to give our children mulligans.