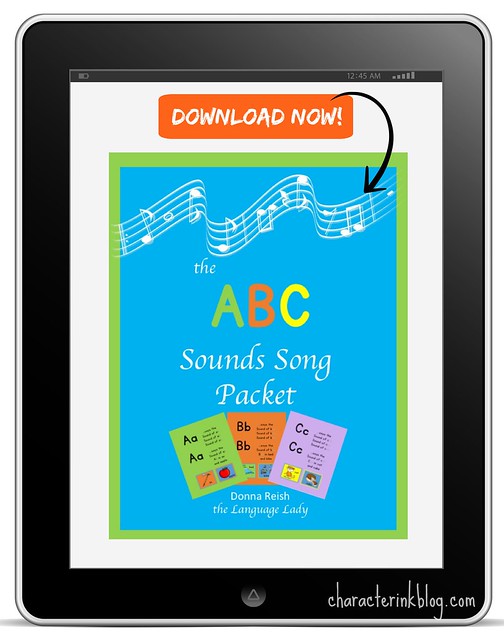 I am finished with the second book/download in the “Letters and Sound” series (only two more to go!). And this one is probably the most important of the four. Yes, the ABC Letters and Picture Cards are valuable for learning clue words for each letter (the first step in learning each letter’s sound) and are amazing for practice activities and games. And yes, the upcoming Little Rhyming ABC Books are tons of fun (and very catchy!). However, this packet/book will have your students singing the sounds of each letter of the alphabet in no time—in a pain-free, multi-sensory manner.

Children remember words of songs. They remember rhymes and mnemonics. They remember jingles and ditties. Thus, a natural way for littles to learn their beginning letter sounds is through one of these means. Enter “The ABC Sounds Song Packet.”

I am so excited to be developing these products now (my first preschool products after writing sixty books for second through twelfth grade students over the past fifteen years!)—as my first grandchild is turning two soon. It won’t be long and Jason and Nonna will be singing these songs together as he learns his letters and sounds! 🙂

In a nutshell, this packet contains 8.5 x 11 inch colored “posters” of each of the twenty-­‐six
letters of the alphabet (plus five additional ones) in song to the tune of “Mary Had a Little
Lamb.” (It actually includes thirty-­‐three posters; see the full explanation of the why’s and how’s of the “Letters and Sounds” program here.)

Each song is the same (same wording, phrasing, and line breaks) as the other. The only differences
among the song sheets are in the letter and the words/picture clues that begin with that letter.

Here is what you get:

1. Three ABC posters with the alphabet laid out in the order and with the line breaks in the same
manner it is sung in the “original” ABC song. (See “Tips for Using the ABC Sound Songs” in the full description at one of my stores: CurrClick, Teachers Pay Teachers, or Teacher’s Notebook.)

2. Twenty-­‐six “regular” letter posters-­‐-­‐the “regular” twenty-­‐six letters of the alphabet, one on each poster, with each letter ’s own “song” with the beginning sound. (See “What Makes This Packet Unique” here!)

You can see samples of the songs here or here or here! But watch out….you will never sing “Mary Had a Little Lamb” the old way again!