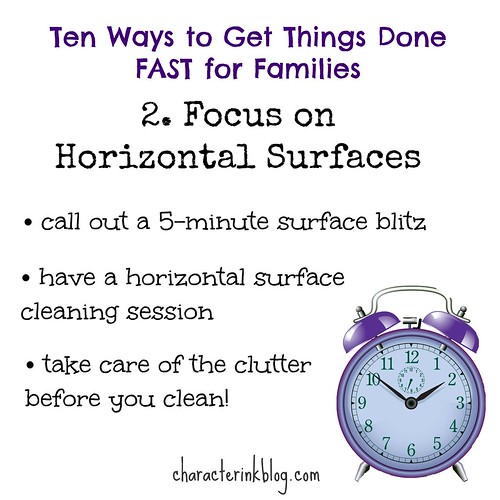 My husband is not a stickler when it comes to cleaning. As a matter of fact, he would seldom notice if something is dusted, vacuumed, or scrubbed. However, he is very sensitive to clutter (which was very unfortunate for him when we had nine people living in fourteen hundred square feet for twelve years!).

It is for this reason that during any cleaning blitz or cleaning time at all, he is often found shouting out the command to focus on horizontal surfaces.

It is for this reason that my second tip to help your family get things done fast is to focus on horizontal surfaces. That is, what is out on the floor, the desk, the dining room table, the bar, end tables, coffee tables, dresser tops, and yes, even treadmills.

While this tip is not necessarily one just for speed, it does make things look better fast, which will in turn make us more efficient.

Here are some ways we use the focus on horizontal services method:

1) When calling a blitz, call out a five-minute surface blitz. That is, tell everybody to not do anything except pick up and put away objects that are lying around. This keeps people from vacuuming or trying to wipe something down when things are still lying around.

2)  Call for a horizontal surface session for a cleaning time. This can either be for everybody to get their own things up around the house before somebody cleans or just to pick up in general. When our older kids were little, before each chore session, we had what we called our “room-to-room time.” This was a version of horizontal surface time. We called for this two, three, or five-minute room-to-room blitz in order to give everybody a chance to pick up all of their clutter before chore time. That way, during chore time, the cleaner didn’t have to clean around everybody’s things. It was also a break in the day in which things got picked up rather than left out for the whole day. Since we had chore time three times a day, before each meal for twenty minutes, this room to room/horizontal surface time helped keep things picked up.

3) If you feel like your house is in great disarray, tell everybody that you are not going to clean as far as shining and scrubbing (except for daily kitchen work, etc.) until you have some horizontal surface times in which junk is taken care of. This can work for the whole house or just for individual rooms. Sometimes this is a good idea for children’s rooms. They have a tendency to get overwhelmed when there is too much junk lying around and if you tell them to clean the room, they might go in with a vacuum and a dust rag when they really just need to focus on the horizontal surfaces. (And going in with them and telling them that you are going to help them for a five minute blitz—or that the whole family is going to help them for five minutes really fast can go a long way in helping them dig in to big messes.)

As I mentioned earlier, focusing on horizontal surfaces won’t necessarily make you faster, but it will make you feel better about your house. Implementing it on an ongoing basis will help keep clutter at bay. It will help your children learn to prioritize household tasks. And it might even make your husband happy.