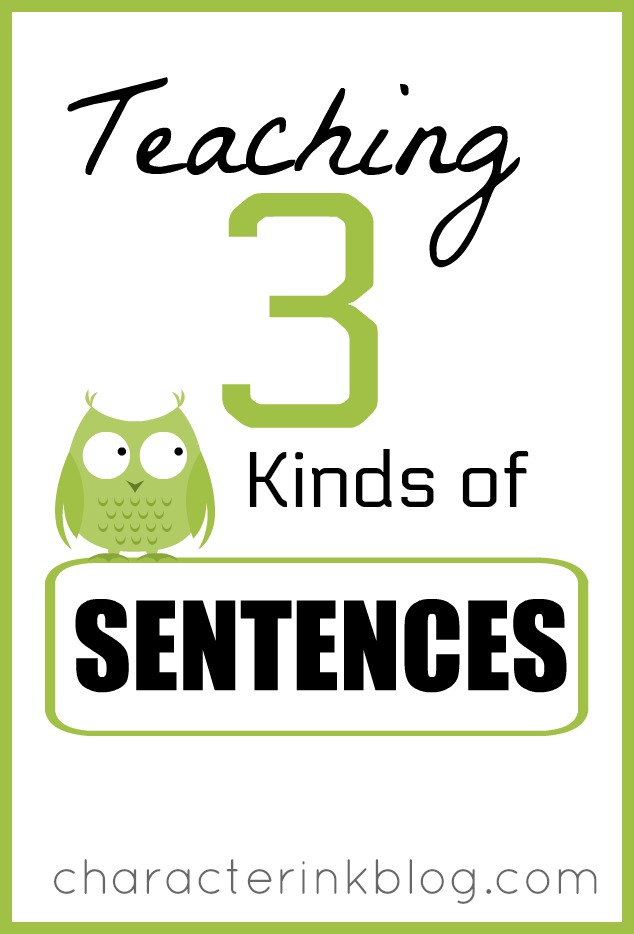 For today, we will introduce the three types of sentence first learned in grade school.

1. A declarative sentence is a statement.

a. It declares (tell or state) something.

b. It ends with a period.

c. It is sometimes called a telling sentence.

2. An interrogative sentence is a question.

a. It asks a question. (To interrogate someone is to ask him a
lot of questions.)

b. It ends with a question mark.

c. It is sometimes called an asking sentence or a question.

3. An exclamatory sentence is an excited sentence.

a. It is used to show strong emotion or excitement.

b. It ends with an exclamation point (or excited mark!).

c. It is sometimes called on excited sentence. 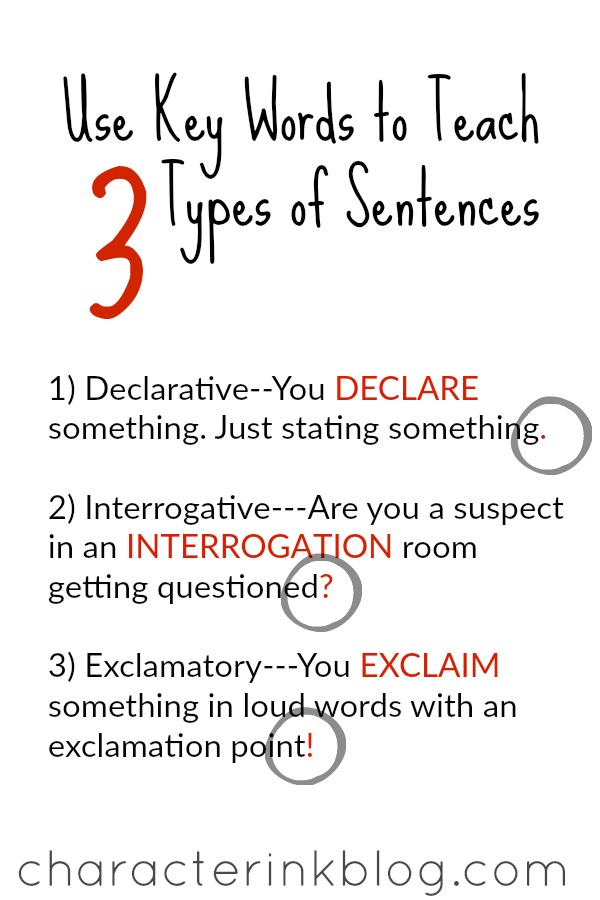 While these skills are way easier than teaching a student to hear the realness or “unrealness” of a sentence (i.e. distinguishing a sentence from a subordinate/dependent clause), here are some tip, s for teaching the three types:

1) I don’t like to add the “fourth” sentence type, imperative sentence, to the initial teaching for these reasons:

a. Students don’t have any “hooks” to hook it on. They don’t know what imperative means–though they might have heard of declare, interrogate, and exclaim before.
b. There are three ending punctuation marks for sentences. Add imperative sentences at first can seem like there should be another end mark.
c. Imperative sentences are really just declaring sentences but giving instructions. Technically, they could also be exclamatory sentences.
d. Beyond the initial teaching of sentence structures, we don’t really talk much about imperative sentences anyway!

2) I like to use three key words to introduce sentence types. Sometimes just shortening longer words to their base can make them easier for students to grasp. I like to use the punctuation marks as part of the key word teaching in phrases like these:

a) Declarative–You DECLARE something. Just stating something.
b) Interrogative—Are you a suspect in an INTERROGATION room getting questioned?
c) Exclamatory—You EXCLAIM something in loud words with an exclamation point!

3) Don’t have all of the student practice in the sentence types be their writing of the sentences. This can be laborious and long for young kiddos. Here are some practice options:

a) Write sentences on cards that are laminated and have them practice putting the punctuation on with wipe off markers.
b) Write sentences on a worksheet for students to add punctuation to.
c) Write lists of sentences that should be changed from one type to another type.
d) Have “sentence type” drills in which students are to find a certain sentence type in their reader or content area book and read it aloud with the emphasis needed for that type of sentence.
e) Don’t ask students to write the three sentence types. Those words are not in their reading or writing vocabulary. Have them draw lines from those words to the sentence types on the other column or write D, I, E….and especially have them put the punctuation marks in the sentences.
f) Bring a Clue game out to use the characters or “weapons” for asking “Interrogative” sentences to each other.
g) Write instances in which a person would EXCLAIM something on cards and have students draw one and state an exclamatory sentence. Write these sentences on the board for them to see them written with the proper punctuation. (These could be yelling over loud music at a concert, calling out to a small child in danger, shouting surprise at a birthday party, etc.)

h) Hang Three Sentence Types posters up during the time you are working on them.
i) Write a short story containing all three types of sentences. Cut the sentences up into strips. Break students into small groups. Have them put the sentences in order for the story. Then have them read the story aloud, emphasizing the sentence types when they fall.