Be, a Helper, Link Verbs – Tricky Trick Download for Students!

I love mnemonics–tricks, songs, jingles, rhymes….anything that helps students learn! I love them even more when they have something to do with the purpose for learning that topic or the topic itself. Like in the case of prepositions–songs can help you learn about three dozen of the over 200 prepositions–but Check Sentences can help you learn 150 or more because Check Sentence have to do with the function of prepositions. (Learn more here)

There are a number of reasons to memorize being, helping, and linking verbs:

(2) They tell WHEN something happened (present, past, etc.). You really need them!

(3) When one stands alone, it may have an adjective following it–which is going back to the noun or pronoun before it, describing that noun or pronoun. (You do not use an adverb with a single BHL verb.)

(5) When a base verb follows has, had, or have (and oftentimes was and were), it should be in its past participle tense:

a. has written
b. had gone
c. have done
d. had lain
e. has risen
f. have come

(6) You can spot them more easily in writing–and get rid of them in order to write more active/less passive sentences!

However, many of these verbs are interchangeable and on two or more of the lists. All of them are passive when used as true linking or being verbs. (More on this later–feel internally is a being/linking verb; feel something with your hand is an action verb.)

So…let’s put them all together, teach what they all do collectively, and memorize them. Students easily learn when to use the three kinds–you won’t find a student trying to use REMAIN in place of WAS in the phrase WAS GOING. They just naturally do that correctly.

So here’s a quick way to learn all 32 being, helping, and linking verbs in one day! 🙂 To the tune of the ABC Song or “Twinkle, Twinkle, Little Star.”

(Learn more about my Think Fast Grammar Quiz and how to teach many parts of speech quickly! )

For your kiddos—print off the Tricky Trick Sheet download given below and hang it on the bulletin board. Sing it every day–and your students will learn them in no time! 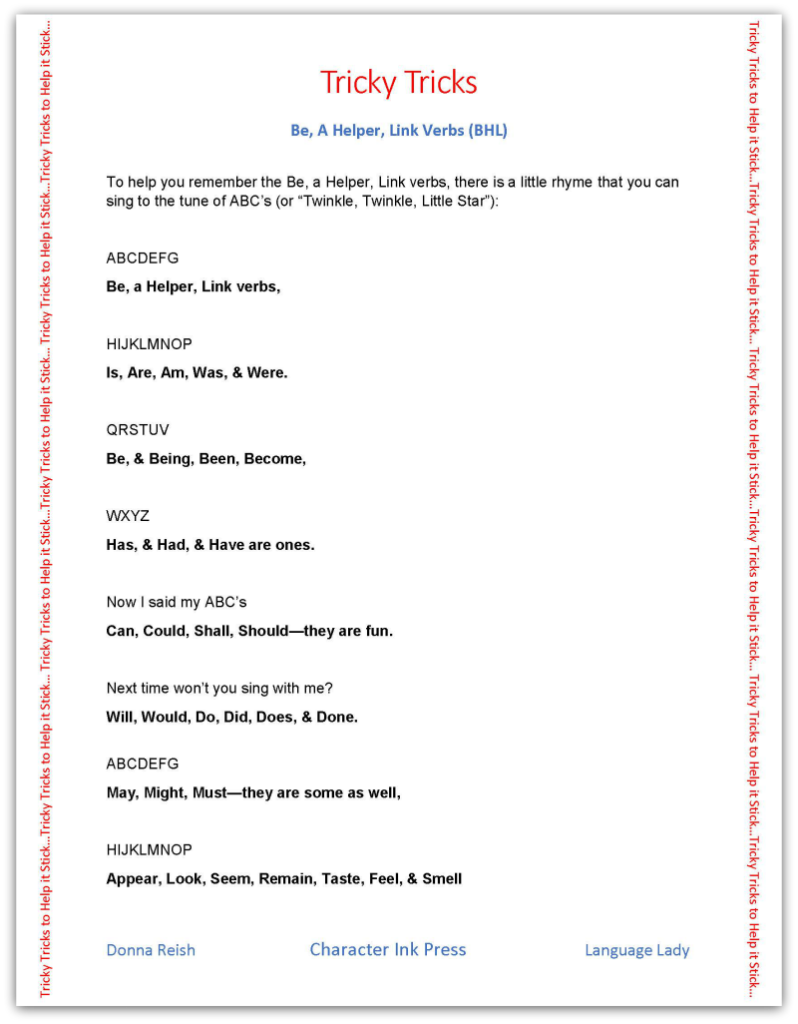 See all of my Tricky Trick Sheets here!

P.S. What was your favorite tricky trick when you were in school?