52 Weeks of Talking to Our Kids: Non-Conflict Times 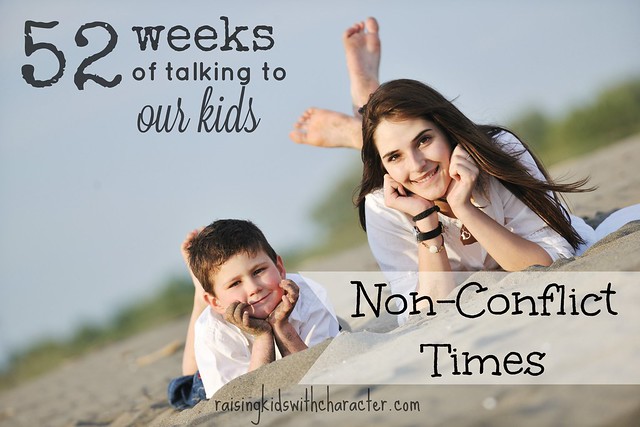 When is the best time to solve problems? Before they start!

The same thing is true in parenting. If we can talk through issues and problems before they arise, we will be ahead of the game in parenting.

My husband always used the mantra that we should “talk about this during non-conflict times.”

That is, we shouldn’t try to solve a bunch of problems, make new rules, talk through too many things, etc., when we were in the middle of a conflict.

If we were trying to solve something with one of our teens and things got heated, Ray would just say, “We’re not going to solve this tonight. Let’s go to bed and talk about it tomorrow evening when we’ve had a chance to think about it more.”

This is obviously useful for potential arguments and disagreements, but it is also useful for talking.

We can talk about things, solve problems, come up with solutions to difficulties, etc., when we talk about the situation or problem during a time that it (whatever it might be) is NOT happening.

For example, we would talk about expected behavior for an event or new suggestions for getting along with each other or a new chore schedule not when things were falling apart around us—but rather completely separated from the problem or situation that needed changed.

Taking the example of the kids not getting along, we would walk through a situation with the kids and solve it for that moment (using many of the other talk techniques we will be looking at this year, such as only talking about what you did—not what the other person did; or teaching kids to talk to each other before coming to Mom and Dad). But as far as implementing strategies for the future, we would hold off on that—not talk about that at that moment.

Then during a “non-conflict time”—for example during our next family meeting or family night or drive somewhere (depending on how many people needed to be involved in the conversation), we would talk about some solutions we wanted to implement for kids getting along. We might talk about wording the kids should use with another if the person seemed hostile (“Can we talk about this in friendlier tones?”)

And during that “non-conflict time,” we would talk about what we would like to see the kids do to get along better.

Talking during non-conflict times usually means talking during peace times. It means bringing new ideas and solutions to situations that might be met with hostility or indifference if a conflict were happening at that time. It means making sure peace is reigning before trying to bring in even more to the subject.

Non-conflict times are really good times to talk with your kids!