52 Weeks of Talking To Our Kids: When You Have a Good Report 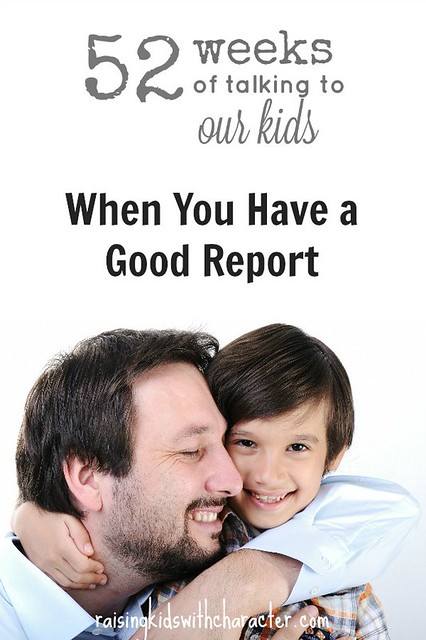 Daddy was home and was calling his fifth child, six year old Jonathan, into his room.

But Jonathan wasn’t concerned. He didn’t think he was about to get into trouble. He didn’t worry that he had done something wrong.

He knew what Daddy wanted: to praise, affirm, and encourage him. Jonathan knew that he was about to hear the words that all of our kids waited to hear in the evenings:

“I heard a good report about you!”

Jonathan had done a typical Jonathan thing that day (besides play mightily, listen intently, and get distracted consistently—he was, after all, a six year old boy!). He had slowed down in his race against his four year old brother to get each one’s rack of the dishwasher unloaded. He had slowed down for one important reason—to let Josiah win.

Daddy didn’t swirl him. That was Mommy’s gig. But Daddy used the magic words. And that was enough.

This scene was a common one in our house. We had learned when our oldest was a little boy that public praise was worth double to children. That when parents talked about their kids’ good behaviors in front of the kids and in front of others, it would have a lasting impact on the kids. And it always did.

Obviously, to carry this out well, parents need to be in tune with each other, communicating often and parenting together. They need to go out of their way to find those good things that they can praise their children for. They need to be consistently teaching character so that when a good character is displayed, the kids know what the parents are talking about and why it is important.

Lasting impact? That little six year old is now nearly twenty-four. He recently preached a sermon about heaven during his master’s internship. Near the end of his sermon, he likened entering the gates of heaven and hearing the Lord proclaim, “Well done, thou great and faithful servant” to how it felt when he was a boy and his daddy would say the magic words, “I heard a good report about you!”

Yep…this talk time can make a huge difference in your kids’ lives. So use this “talk time” often!