How to Build Chores Into Your Daily Schedule 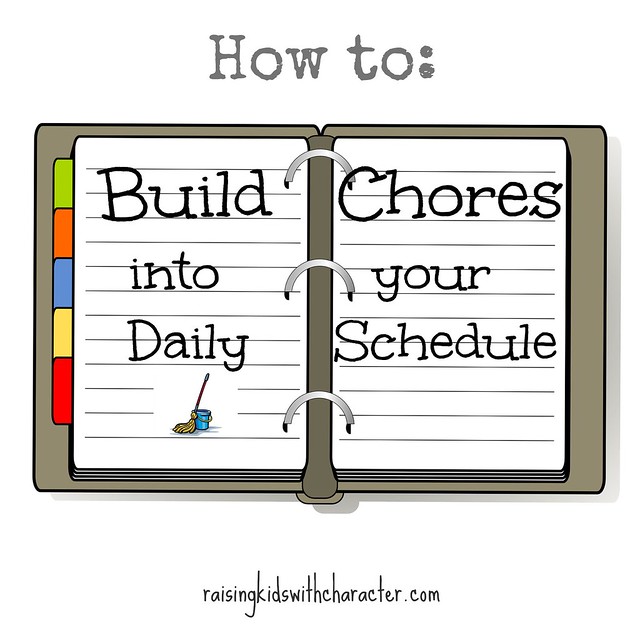 Once the training of the chore is completed, the fun part of actually having someone consistently and correctly do the job begins. This will work out much better if you have set up a certain protocol that is followed to be sure that the chores that you have taught are actually completed and completed when needed.

We personally had three chore sessions a day before each meal for twenty minutes or so. We learned this approach from Greg Harris in his early Christian Homeschool Workshop (twenty-five years ago!) where he taught us to attach important things in our day to something that is already in the schedule. It felt natural to add a chore session before each meal.

This worked well for us because we had one person, Mom in the beginning, fixing meals during that time. When we added a chore session to that, it meant that everybody was working at the same time on various areas. It also meant there was a a starting point and an ending point.

Some families prefer to simply have a chore chart in which all the chores are assigned and they just need to be done by a certain time of day. That is another approach. I liked all together because it allowed everything to be done at the same time. It was also easier than trying to track down everybody at 3 o’clock and asked if this was done or that was done. Of course, this can be overcome by creating a chore chart in which the child marks off or moves something after he does it. (Assuming the checking is in place—don’t expect what you won’t inspect!)

Whatever approach you decide to take for your chore schedule, be sure that the chores are done regularly. Check out my blog post about three times a day – laundry, dishes, trash. For us personally, we like to give the daily work to younger children. Daily jobs give the child the opportunity to practice that chore over and over again each day. In this way, the child gets better and better at the jobs. They are also very visible as in you can see if the dishes are done or the trash is taken out. Also, they are needed every day, and generally speaking, younger children are around every day whereas older children might go out to a job or sports or extra classes.

If you have not had a true routine set up previously, the first place to start is definitely the dailies. There is no reason to have the coffee tables all dusted when you can’t walk through the living room. Likewise, it is very difficult to dust the room with clutter everywhere. In that way, I would begin training children on daily chores first and foremost. If each child just learned one daily task every couple of weeks, the daily tasks could be passed out, taught, and completed every day within a month’s time. This would make the school day run much more smoothly and give the children a sense of accomplishment and pride to have completed such important jobs.

→For a complete list of all ages and appropriate chores (including Working With Someone Else lists), see our Age-Appropriate Chores Poster Pack.